By: Garland Pollard
In: Tourism
Tagged: Holiday Inn
With: 4 Comments 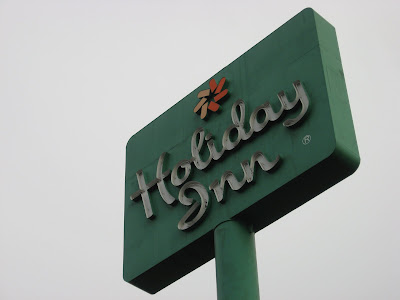 NORTH HOLLYWOOD – This week, we got a press release from the Beverly Garland Holiday Inn. It is proof that franchised chains like Holiday Inn can encourage diversity within their system, yet preserve their Holiday Inn-ness.

Now, you should know that I am a big Holiday Inn fan, and have been since I was a kid, when some of the restaurants had special kids menus printed on pirate hats. That’s why I’ve written here about things like the greatness of the Holidome, the stupidness of changing the font and such. I will put up with a very mediocre Holiday Inn, just for the experience of being in a Holiday Inn, though I have to admit the chain has tested me in recent years by its inconsistent service and frustrating ignorance of its largest asset, its brand. (They are opening a new Holiday Inn mega-resort in Lake Buena Vista, at Disney. Good news.)

When I grew up, there were all sorts of special Holiday Inns with a sub-theme. One of the more interesting was the Holiday Inn 1776, which was in Williamsburg. Done with a Bicentennial spirit, it was built on a sprawling campus just outside of the restored area. While a fascinating concept, the dormers have an ill shape to them, which makes it look a bit off. It has changed franchises, now a Ramada, but still exists. The Holiday Inn Chattanooga Choo-Choo, now affiliated with Historic Hotels of America, was one of the wildest Holiday Inn experiments. It was built inside a train station.

Holiday Inn makes no mention of the vintage of their hotels. They try to hide the history of them, when they get old. But that is a bad idea. Here’s why. Hotel guests care only if their hotels are well maintained, if the paint is fresh, and the carpeting is new. If the interior is fresh, the staff is friendly and the food is good, it is a successful Holiday Inn. Age has little to do with the equation, as hotels need to get “scraped” down to new interiors every few years anyway. You can, however, find the vintage old style motels by seeing if they are exterior corridors. Sadly, few of the signs survive except in museums.

Thankfully, still, there are sub-themed Holiday Inns, ones that carve their own identity yet adhere to the brand.

We would love it if readers would leave comments as to other great Holiday Inns around the globe, particularly original exterior corridor Holiday Inns that have stayed in the system.

2009-11-19
Previous Post: Ode to the Texas Instruments Calculator
Next Post: Quikrete Is the Great D.I.Y. Concrete and Sand Brand